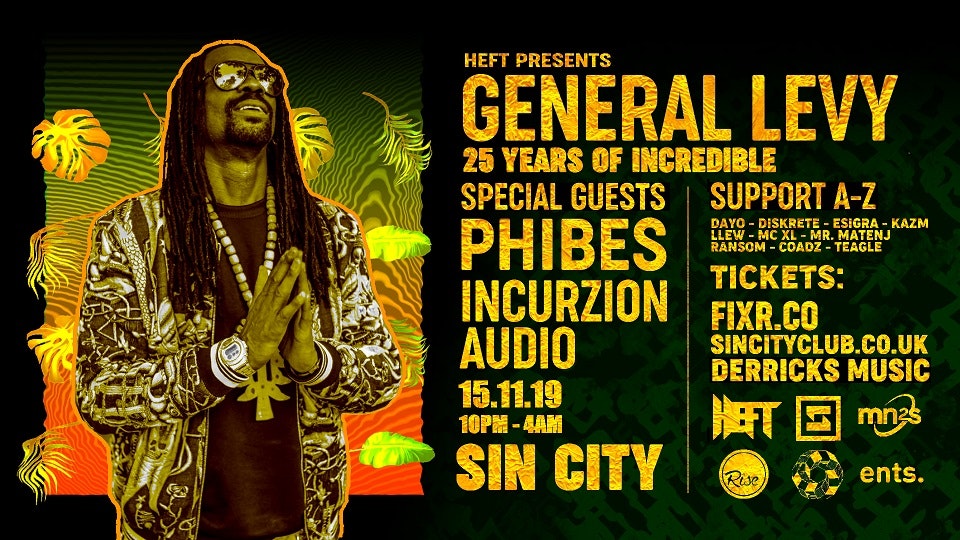 We’re proud to be returning to Sin City on November 15th to bring you the Swansea leg of General Levy’s 25 Years Of Incredible Tour!

Few people have contributed as much to the urban music scene in the UK as General Levy. The man born Paul Levy in London in 1971 grew up around West Indian Asian and African communities, and this always inspired his musical tastes. Reggae and black culture came to define what he did and the sets he played, as did soul and ska, hip hop and calypso as well as many more different sounds. Even at the age of just 14, Levy was forming sound system crews and putting on parties. Before long some studios came calling and his career really took off.

Since then, he has become one of the most in demand MCs of his generation and has put out singles like ‘Tell Me Why’ and ‘You Can’t Hurry Love’ as well as working on independent reggae labels like Fashion Records. He managed to clock up a mainstream hit with Renk Records in cahoots with M Beat on the single ‘Incredible’ in 1994, as well as causing something of a stir on the underground scene. A debut album came in 1992, entitled Double Trouble, and work on labels like Justice Records, gold awards for his MCing and recognition for his fine body of recorded work all ensued. In the years since, Levy has collaborated with the likes of Sly & Robbie, Shaggy, Sting International and Artful Dodger amongst many more, and remains a true stalwart of the UK urban music scene who has much to offer and plenty of unique ideas up his sleeve.